Many options affect how views look and behave

These options can be seen and edited as follows

Group by all non-aggregate fields

When a user opens this view, immediately show charts rather than data rows

The goal of this feature is to allow rapid and efficient editing of data when in the list view so there’s no need to drill down into a record to edit and back to the list again after each.

Some examples of where this might be useful would be when working through a list of milestones to update statuses, or when in a list of stock items to update quantities.

into this editable version:

Certain fields will be editable, but others will be read-only. Fields that can be editable are all those which are from the view’s parent table, except for

The visual style affects whether the view is shown as

When headings and rows is selected, the first field in the view will be used as a heading for the rows below. A new heading appears every time the field value changes. 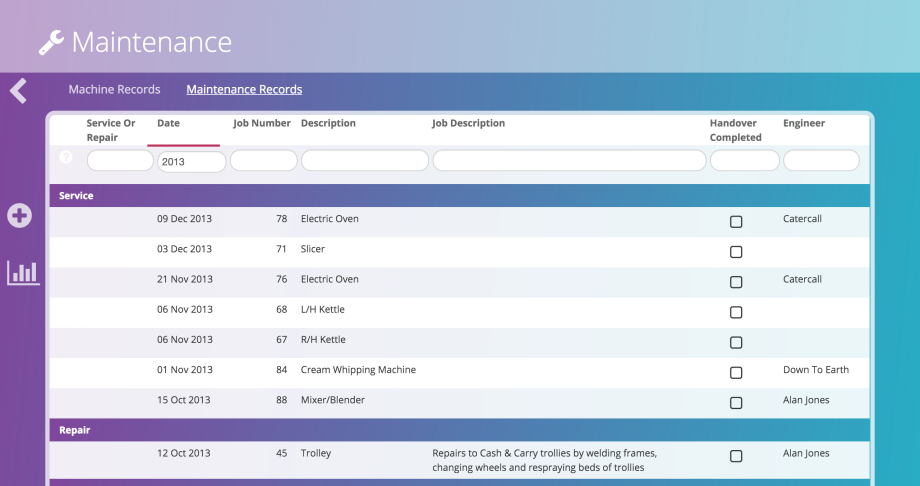 Only return the top N rows of data from the view, even if there are more available. This is equivalent to adding a LIMIT clause in SQL.

If many rows in the view have the same values for a particular field, then reduce the number shown to only one row for every distinct (unique) value of that field. The top row is returned.

Multiple distinct fields can be added, in which case the rows reduce based on their values unique in combination.

For example, imagine you have a view showing countries, cities and populations, sorted by population descending, with data like:

Adding a distinct field on the country would reduce this to the most populated city in each country, i.e.

DISTINCT is an SQL feature

If you have two views with fields of the same type in the same order, then you can merge them together into one. The field names don’t necessarily need to be the same.

This is done using an SQL UNION clause.

Caching can speed up views. It doesn’t need to be used often a the underlying database PostgreSQL is great at dealing with large data problems, but when it is necessary it can significantly speed up access, allowing faster loading and searching. Caching works well when

If both those criteria are met, then turning on caching can significantly speed a view up, allowing faster loading and searching. There are three options

If a view is cached and other views reference it, those other views will also speed up too.

If you find a view is slow, feel free to contact us for support before trying options like caching, there are many other targetted options we can look at first, such as adding indexes.

Was this page helpful?

Glad to hear it! Please tell us how we can improve.

Sorry to hear that. Please tell us how we can improve.